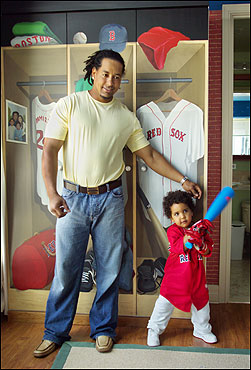 Tom Verducci's yet to be released S.I. article will claim that Manny Ramirez wants to be traded from the Boston Red Sox. Verducci claims that this is Manny's third time in four years that he has asked Sox brass to trade him. Verducci goes on to claim that Manny is unhappy with his situation right now due to a lack of privacy. Makes sense... I too feel like my privacy has been violated when I invite Boston Globe photographer Eric Roth into my sons bedroom to take pictures of my family.

Back to the Well

It was May 18th when Wells had his last bad start. The pitcher I was ready to hate has turned his ship around for the time being giving up just 3 earned runs in his last two starts. Tonight he faces the devil dogs in the tropical Tampa Bay. The Red Sox have faced the Devil Rays nine times this year and won all but three times.

I think he can get used to having a lead for sure. But at the same time once he gets that lead he knows what to do with it." -- Terry Francona

I Pity the White Sox

Was it three years ago the White Sox had the best record in Baseball (by a lot) at the mid-way mark, were on the cover of SI, and the talk of baseball, only to totally collapse and have a forgettable season? Gee that could never happen again.
It is not that often that Mr. T throws out a baseball to a Red Sox game, so I will take this opportunity to display a classic Mr. T moment.

Fools will come to my home to ask me to stop pitying them, but it will be raining, and I won't be home so I will continue to pity them." Mr. T

Carl Everett is the man! The craziest man to ever have played baseball. Strike that, the craziest man to have ever played baseball and have been pretty good at it. I was sad to see Carl go when he got traded for a box of donuts many years ago, but if I learned one thing from last year it was that Nomar was a cancer and if you don't get rid of cancer you won't win the World Series or 7 straight Tour de France. What I didn't learn last year is that cancer can sometimes come back to bite you in the ass or ball sack as it where. Thursday night the Bible thumping Carl turned walks into wine. Well, that would make since if you replace wine with a two run first inning homer. Fortunately Clement didn't pull a Lowe and crap all over himself.

Schilling, like he has all season, blew. This time it was officially documented that way in the eighth after giving up a run in a one run game. Fortunately for Schilling Manny Ramirez is very good and Vizcaino is, umm, not so good. Manny took Vizcaino deep to give the out of town Sox a lead that would hold up for the win.

I'm incredibly disappointed, I forgot this feeling, letting down your starter, you know they battle they get a lead. The thought process behind some of the pitches was not what it needed to be, and that is an adjustment I have to make." -- Curt Schilling 7-22-05

Embree Tossed in the Trash Can

The Sox designated Alan Embree for assignment Tuesday. A move that could be clearing roster spots for impending trades, but ultimately means that Embree has been worthless this season. Earlier this season he lead the league in appearances, and today he leads the league in suckyness. Last year Embree successfully held down the seventh inning roll setting up for Timlin and Foulke. This year he pitched 37 innings and gave up 32 earned runs.

The Begining of the End

It's all over, break out your nearest panic button and start pushing. The Sox just lost to the devil dogs, Damon's streak is over, and the Yankees have moved into first place. F-ing great. Just when it was starting to look like the Yankees had no chance of eclipsing the Red Sox win total due to their piss poor pitching performance, but now after Al Leiter looked like Cy Young Sunday night anything is possible. This sucks. Bellhorn Sucks. The Yankees Suck. Stop ruining my summer. If I have one dream for my beloved Red Sox in this post apocalyptic world championship world it would be for the Sox to win the AL East. This is beginning to feel like all too many summers of the past, the Sox start off hot, struggle a bit, but are still in first place by the fourth of July, then WHAMO! Yankees move into first and it is a fruitless uphill battle until the end of September.

Oh well, the mulligan card will be firmly in play. 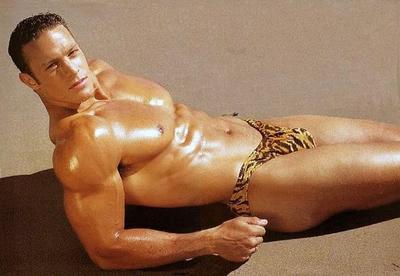 Kapler has returned to America and will soon return to the Red Sox once contractual matters are taken care of. Right now he is in Ft Myers laying out in this fancy swimwear. Or more likely he is working out at the Red Sox spring training facility until his debut is ready to be announced. He is obviously gay since he thought it was a good idea to wear a tiger print banana hammock like that one, but his teammates didn't seem to mind and they all loved him (in a non-gay fashion). Kapler sucked balls in Japan, hitting below the Mendoza line, but that wont matter much since he will only be taking over Jay Payton's warm bench spot.

Welcome back Gabe, now put some pants on.

It was set up to be a situation that was great, if I did what I was supposed to do. I made two big mistakes back-to-back. ... It's frustrating, disappointing."-- Curt Schilling 7-14-05

Fresh from a trip to LA on Wednesday Schilling wasted no time Thursday night in being ineffective. It took just seven pitches to give up two runs and the game to the Yankees. The good news is that Wells, Boston's worst starting pitcher, will face someone who might be less effective then the fat man. Wells and the Sox are slightly favored to win according to Vegas.

Thinking on the Job

BEHIND THE SCENE OF KELLY'S BEHIND

The Yankees Suck... This Time For Real

No longer can the Yankees score runs like the Sox can, and the five through nine hitters in either line up prove that day in and day out. Joe Torre can no longer take 9 Yankees to the mid-summer classic, this year Torre can actually take zero since he is not the reigning World Series manager, another point of Gotham suckage, however only 3 pin-stippers actually earned their way to compared to what seems like a paltry 5 Red Sox. No other team, regardless of league, has 4 starters on the field at the start of the game other than the Red Sox.

Championships are won with pitching not offense you say? Randy Johnson and Mike Mussina can not be laughed off, but their +4 combined ERA can. Take away Johnson and Moose and you have nothing but Wang. Actually I just like putting Wang into any sentence regardless on how it is pronounced. After the Wang (6) the closer (Mo) leads the team with wins (4). Kevin Brown is a joke that needs me to do nothing in order to insult him, and Carl Pavano does his best job of being predominantly incognito as he ends up on the DL. Nothing here can and will change.

So there you have it, the Yankees suck, and they can't actually do anything about it. Short of Cashman some how bolstering this team with another front line starter prior to the trade dead line this Yankee team is done before they ever were even in first place.

The Yankees do in fact suck.

I've always understood this is a very different job. It's going to be what I make it from a mental standpoint. When the phone rings, I'll be ready to take the ball."--Curt Schilling 7-9-05

It seems that Curt is making it clear that he is ready to answer the call of his closer roll and also to answer any doubt (from Johnny Damon or others) that he can get ready and warm up just as fast as anyone else.

I got ready fast, just like the other day. I'm not going to need any extra pitches, any more than anybody else. With a phone call, I can be ready as quick as I need to be.

In his second outing as a reliever (for the Sox) he faired much better than his two run debut posting a one, two, three inning with just seven pitches.

There has been problems with the Blogger based publishing, as well as the home server of thebostonblogger.com. To make matters more interesting, I have been and will be on vacation for another week, so please be patient as I work to return The Boston Blogger back to its normal operative order.

Red Sox Send Foulke Back to Boston After Another Loss