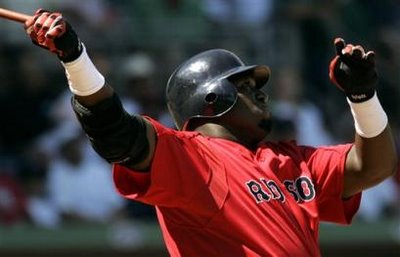 According to ESPNdeportes.com reporter Enrique Rojas, David Ortiz may be close to signing a contract extension that will keep him, through his prime, until the year 2010. Below is a rough translation of the article.

Until the 2010 in Boston?
David Ortiz could sign with the Red Sox a contract extension by a total of $50 million
By Red Enrique ESPNdeportes.com MIAMI, Florida --
The Dominican toletero David Ortiz is near signing an extension of 50 million dollars with the Red Sox of Boston, said to ESPNdeportes.com a familiar source related to the pelotero. "Big Papi" would gain an average of 12,5 annual million in the seasons from the 2007 to the 2010. "David is going to receive more than 50 million dollars by the company/signature of that contract extension, that runs until the 2010", it said the source. "David is very contented, although they even lack some details to define", added. Nevertheless, a representative of the agency SFX, that handles the race of Ortiz, abstained to give details of the negotiations with the Red Averages. "we are negotiating, that is of public knowledge, but we are not prepared to announce nothing. Not yet there is agreement ", said Fizgerald Astacio. Ortiz, of 30 years, has become one of the most productive players of the Great Leagues since it was united to the Red Averages before the season of the 2003, coming from Minnesota. The inicialista and designated batter have stuck 119 quadrangular ones and have pushed 388 races in three seasons with the Red Averages. The quisqueyano was left secondly in the votings for the prize of More valuable Player of American Liga the last year, when it batted 300 with 47 home runs and 148 towed races. The antesalista Alex Rodriguez, of the Yankees of New York, was the winner of the distinction. Ortiz was the Most valuable Player of the Series of Championship of the 2004, when Boston returned of a disadvantage 0-3 to eliminate the Yankees and to advance to the World-wide Series. In the Classic one of Autumn, Boston swept the Cardinals of San Luis in four parties to gain his first crown from 1918. Ortiz will gain 6,5 million dollars in the 2006, when it finalizes an agreement of two seasons and 12,5 million that signed in May of the 2004. The club has an option of 7,7 million for the 2007. The player publicly demands from the winter pause a contract extension to the Red Sox. Last Tuesday, Ortiz said that it would leave his agents who were in charge of the negotiations and that he would not participate actively in the process.

The Red Sox Spring Training has come to an end, and they could not have done much worse. Most notable there was no offense to speak of which is not supposed to be the case in the spring. Good riddance spring, it is all meaningless if you choose to believe that. 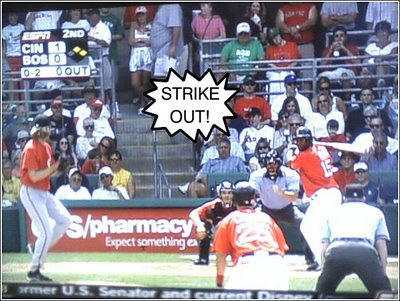 Arroyo Strikes Out Wily Mo
Bronson Arroyo put on a show Thursday afternoon against his old mates. Arroyo pitched shut out ball for seven innings. Striking out 9 and allowing only 3 hits. I give it 2 months until we need him back in the rotation. 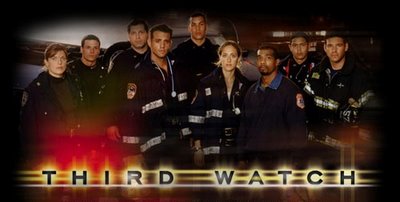 AN EMERGENCY IS WAITING AT THIRD

MLB scouts are claiming Mike Lowell has no place in baseball anymore, all the while he will make 9,000,000 dollars this year. He hasn't hit this spring at all, and he is slated to hit 7th in the line up. For that reason alone the Red Sox can kiss their league leading offense goodbye. What are the options at third? Youkilis? Can Wily Mo Pena play third? 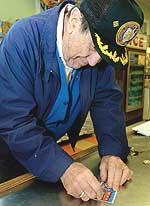 Starting April 11 the Red Sox will be the first team in MLB history to offer team sponsored lottery tickets.

When Major League Baseball owners unanimously voted to allow team logos to be part of instant ticket games, we then had an opportunity to create yet another innovative venture,''-- Larry Lucchino 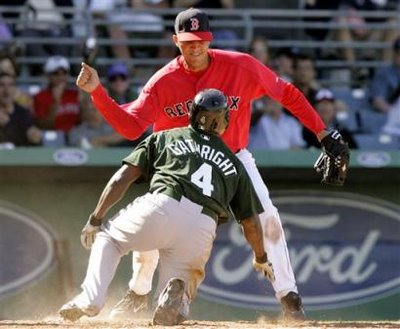 After covering home and getting spiked by Joey Gathright sliding into the plate, Red Sox pitcher Julian Tavarez decided the best thing to do in that situation was to punch Joey G in the face; and can you argue with him? Where is Daubach when you need him? He was cut by the Cardinals and sent to minor league camp. 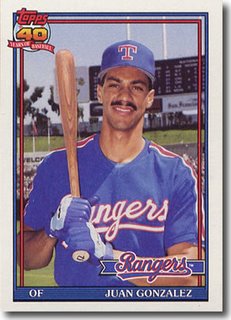 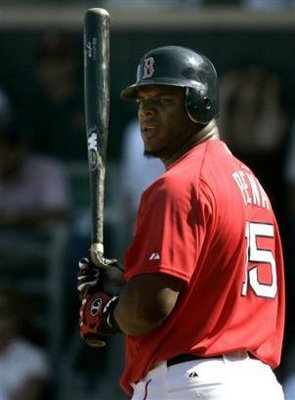 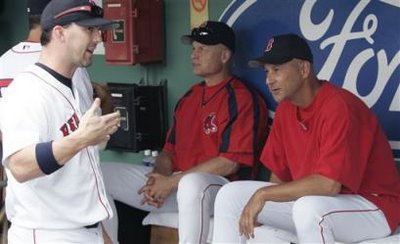 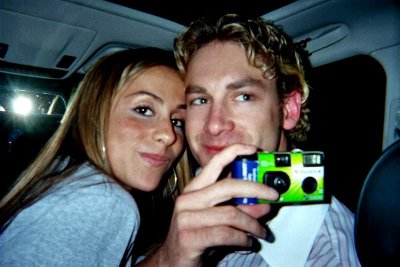 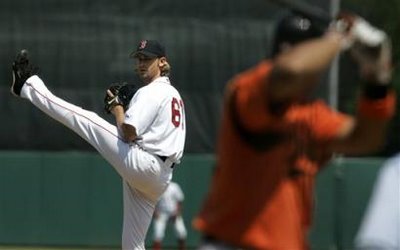 After looking simply awful in his previous spring outings, Arroyo posted his first encouraging outing Sunday and lowered his ERA by more than 7 runs. Arroyo pitched 5 clean scoreless innings, scattering just 4 hits throughout. This was the first outing for Arroyo that Varitek caught. After the outing Arroyo stated he would be fine with starting the season in the bullpen. 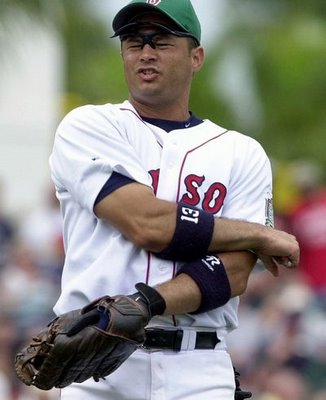 The Ghost of St Patrick's Past

Schilling Takes His Game To A New Level

SCHILLING SIGNS ON WITH EVERQUEST II 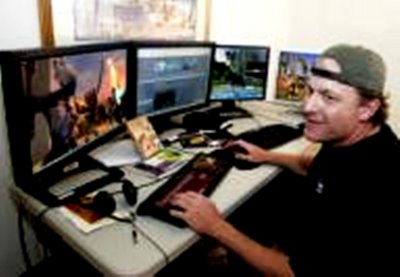 I've been playing video games a long time. I've been a fan of Sony Online
since the first time I logged into the original EverQuest. That passion has
only increased since the launch of EverQuest II."-- Curt Schilling

According to Curt it is a family affair.

EverQuest II provides me an opportunity to remain in touch with my family
during the incredible travel... My son Gehrig and I play together when I'm not
working and he's not in school."-- MVP Gamer Schilling 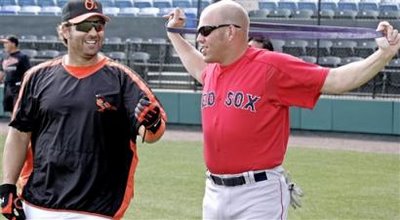 Kevin Millar, we hardly knew you, talks to the new Red Sox first baseman Kevin Youkilis on Wednesday prior to their spring training game at Fort Lauderdale Stadium. Baltimore won the game 3-1 as Millar went 0-4 as the birds DH.

A-Gon is a Gone

Alex Gonzalez was excited to compete in the Word Baseball Classic for his mother land, Venezuela until...

Hey, Alex, we had a meeting and made a decision to take one player off the roster, and it was you,'"-- Alex Gonzalez on what his voice mail said Friday

I always say Manny [Ramirez] is a strange guy. Outwardly, he's happy-go-lucky. On the inside, he's got a lot of conspiracy theories going on. I would say Manny might be one of these guys when he's 50 years old, he might be in his house with all the blinds shut kind of looking out like the CIA's out there. You don't know, man. I mean, you don't know what's going on in the interior with him. So you don't worry about it." -- Bronson Arroyo

It took the first batter in the first inning of the first spring training game for Jonathan Papelbon to get hit by a ball off the Twins lead off hitter's bat. After taking a 5 minute injury break Papelbon stayed in the game to retire the side.
In the second inning facing Tori Hunter Papelbon gave up a solo homer on his first pitch. 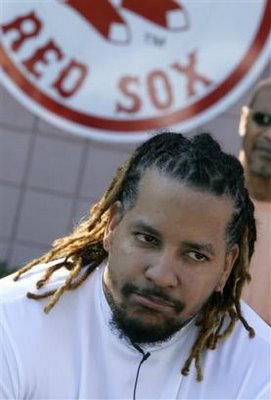 My main focus, like I say, is getting prepared for the season to help Boston win. I'm here. I don't live in the past, I live in the present.
I especially like the attention, I know that I'm one of the top guys in this game and all the attention is on me, I got a lot of people on my shoulder, but I'm human. I like to go. I like to have fun. I like to do this and that but I got to represent Boston and the Red Sox in every way that I do outside this game.
I got a beautiful career going on and I'm not going to let little things like this mess all the things that I accomplished because I think when I finish my career I'm going to be a special player.
I'm not ready, so I'm not going to go out there and make a fool of myself."-- Manny Ramirez 3/1/06