Time for Another Starter

Just How Bad is the Red Sox Pitching Staff?
And who is the worst starter?
Below is a ranking of Boston's starting pitching staff against all other starters in MLB for the entire season. Now that Joe Kelly is out the rotation it is pretty easy to state that Rick Porcello is the worst starter in Boston's rotation and after his start on July 1st against Toronto he might not even be in the starting rotation any longer.Â

We're Not Dead Yet

So You are Saying there's a Chance?
The Red Sox move from 10 games back and the season over to 6 games back with a prayer in less than a week. 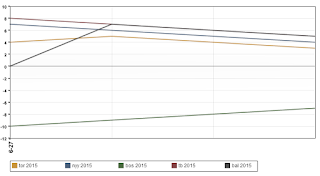