I'll tell you one thing, too. I'm glad we're done with Interleague. I was able to hit a home run in that water on Sunday in San Francisco, and you know I wanted to hit that water bad. But it's not easy stepping in against a guy like Tim Lincecum after not playing for two days in a row." David Ortiz 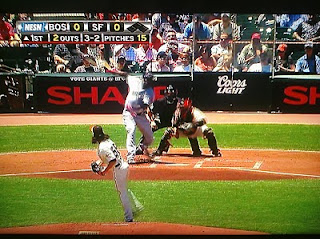 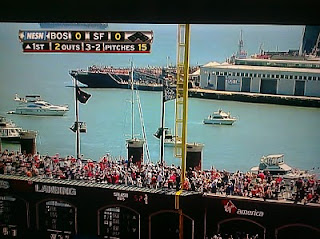 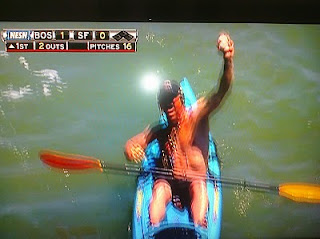 Ortiz puts on in the drink for a Red Sox fan.

I've been feeling good at the plate lately, been seeing the ball good, hitting the ball all over the place. When you feel good, the only thing is you've got to get a good pitch to hit. Tonight, I got good pitches to hit and I didn't miss them. I didn't see where it went. I just saw the left fielder put his head down. I'm like, 'That's awesome."-- Dustin Pedroia 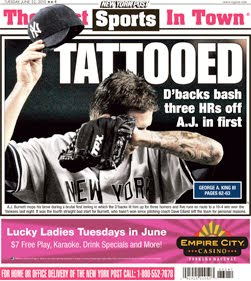 What a difference a month makes. May 22nd the Red Sox were 8.5 games out of first place in the AL east. A month later, thanks in part to a terrible start by A.J. Burnett Monday night, the Sox have moved to a half gameÂ  back of the top spot.

The Rocket Returns to Fenway

We've never had a harder worker or a more entertaining player. He was a star who provided great, great moments on an almost regular basis. 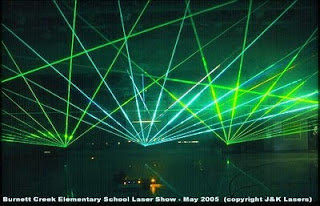 Physically, I'm feeling better, which is a good thing. Seeing the ball better. Working hard, just translating into the game now, which is when it gets fun. I'll be fine." --Dustin Pedroia on his knee pain and recent struggles

And now a message from Greater Boston Tickets about Roger Waters

Roger Waters The Wall Tour 2010
Roger Waters solo world tour in 2007-2008 Was a huge success and he is following it up with The Wall 2010 - 2011 tour. Roger Waters management has
confirmed that "Roger is touring The Wall in its entirety in 2010 and 2011". The official announcement took place on Monday April 12th at 2pm est.

"Thirty years ago when I was kind of an angry and not very young lad, I found myself driven into defensive positions because I was scared of stuff, and I've
come to realize that in that personal story, maybe somewhere hidden in there exists an allegory for more general and universal themes, political and social
themes,It's really for that reason that I decided that I'd try and create a new performance of this piece using a lot of the same things that we did all
those years ago.Projection systems now are completely different from what they were then, which means that I would be able to project over the entire
250-foot expanse of the wall ... which we couldn't do in those days," he said.

The eagerly-awaited Roger Waters concert tour will combine an evening's worth
of music --comprised of two sets plus encores-- with state-of-the-art staging,
lighting and sound.
The Set will consist of Roger Waters and full band performing "The Wall," one of
the defining works of rock music history, from start-to-finish. Waters last performed
"The Wall" live in America with Pink Floyd more than 30 years ago.
The Roger Waters concerts will utilize elaborate large-scale video projections and
theatrical staging to underscore and accentuate the power of the music which is
delivered via a state-of-the-art 3600 quadraphonic sound system immersing the
audience in a 3-dimensional hyperworld. Roger Waters Tickets are selling extremely quickly and Roger has had to expand the tour to fit demands.
The appearance will be a state-of-the art affair, featuring a 240-foot-wide and
35-foot-tall Wall complete and after broken down during the concerts. Other
backdrop and appropriate furnishings are accepted to be allotment of the
appearance as well.
Album illustrator Gerald Scarfe, who worked on the tour and 1982 film, is
providing new art and redesigning puppets and inflatable objects. In the Boston area we recomend getting your Roger Waters Boston Tickets with Greater Boston Tickets as they are sold out.

Masterson Drives All Over the Sox


Watch this at WEEI 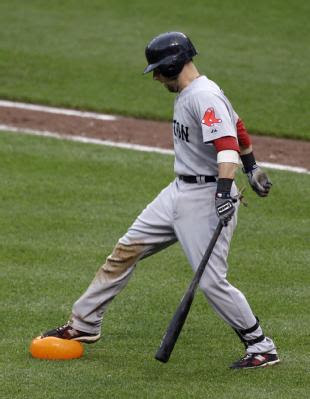 The Sox Move Into 3rd Place 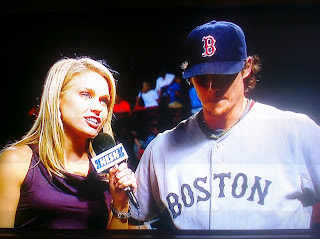