Story Update:
Rice Burned Again (update NO MORE)
You can add HOF to all of your Jim Rice paraphernalia.

Jim Rice was over looked for the hall of fame for the 11th time while a slap hitter for average like Boggs waltzes into the H.O.F. his first time on the ballot. This year Rice received 307 votes out of 516 voters or 59% of the vote. A good way from the 75% needed to be inducted into the hall. This year he did draw his highest percentage of votes as his previous years drew between 52% and 58%.

A recap of his efforts from redsox.com
During his 16-year career, including a 67-at-bat debut in 1974, Rice put up 382 homers and 1,451 RBIs. While eight players with more home runs have been denied Hall of Fame status, none of them had a higher career average than Andre Dawson's .279; Rice (.298) fell a few hits shy of being a lifetime .300 hitter and was a six-time finisher in the AL Top Seven.

He was a pure hitter, not just a bruiser. His 406 total bases in 1978 remains the club record of Boston's storied franchise, in whose annals only two first-ballot Hall of Famers (Ted Williams and Carl Yastrzemski) had more homers or RBIs.

The current irony, of course, is that Wade Boggs, whose career path crossed Rice's in Fenway Park, is considered the darling of this year's ballot. In his 18 seasons, Boggs posted 264 fewer homers and drove in 437 fewer runs than did Rice. All right -- they came from different molds, Boggs being a hit machine who totaled 3,010 of them for a .328 average. 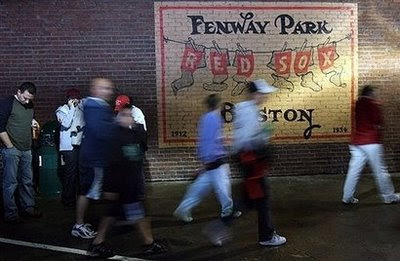 Under pressure from investors to sell noncore assets in recent years, executives of the Times Company have said repeatedly that they were open to selling the stake, but only on the right terms.

But recently, they have been actively shopping the companyâs stake in New England Sports Ventures, which owns the Red Sox, said the person briefed on the plans, who was not authorized to discuss the matter and was given anonymity. The Times Company informed its partners in the venture of its plans last month.